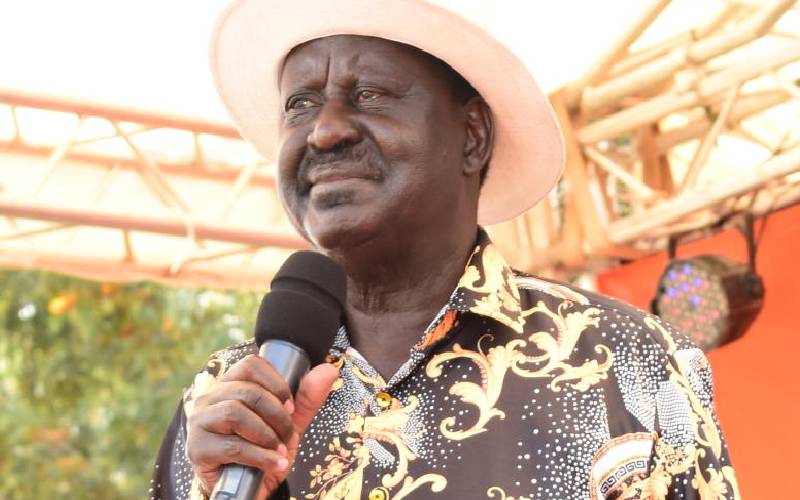 ODM leader Raila Odinga (pictured) has narrated how he and President Uhuru Kenyatta buried the hatchet to forge a united front.
Speaking at the University of Nairobi where he met youth from Mt Kenya, Raila said he has since forgiven Uhuru for calling him muguruki, Gikuyu for a mad man.

The ODM leader said the President had also forgiven him for referring to him as a drunkard.
Raila was explaining what happened in the aftermath of the 2017 repeat presidential election that he and his team boycotted.

What it will take to execute Raila’s social protection policy

Kimemia: Mt Kenya governors have not been coerced to support Raila

What it will take to execute Raila’s social protection policy
Kimemia: Mt Kenya governors have not been coerced to support Raila
First-term MPs with eyes on governor seats face tough battle
Raila’s big announcement in December
Following the stalemate, Raila and Uhuru, on March 9, 2018,  buried their differences in a rapprochement now famously called the Handshake.
The ODM leader said he and Uhuru were locked in two meetings that lasted 13 hours and six hours before they agreed to resolve the issues.
Their motivation, Raila says, was the nationalistic roles played by their fathers and hence their contribution to Kenya's independence.

Raila said their fathers were so close that Uhuru is like his brother. "We remember where we came from and our sense of nationalism," he said.
He cautioned Kenyans against viewing each other only by the community they belong to.
"Never again will Kenyans fight after an election," the ODM leader added.
Raila further added that he is confident next year's polls will be free and fair.
He said the top contributor to post-election violence is how the polls are conducted.

"IDPs are still in camps since the 2007-08 post-poll chaos."
Raila said there is a need to address unity in the run-up to the election to avoid violence, which is what the Handshake is premised on.
Raila’s meeting with the Mount Kenya youth comes on the backdrop of politicians wooing the vote-rich bloc ahead of the general election.
The Mount Kenya Foundation (MKF) leaders have announced they will unveil their preferred presidential candidate at a retreat in Limuru.
MKF made the disclosure on October 8 as they fought claims that they had settled on ODM leader Raila Odinga on a day One Kenya Alliance (OKA) principals made a strong pitch for their respective candidature.
The businessmen and politicians challenged the opposition leaders to present a united front in the next poll to avoid splitting votes in what may work in favour of Deputy President William Ruto.

Parents grapple with high costs of books as schools reopen

The parents have also asked the government to step in and provide some learning materials for pupils, especially those under the CBC.

One militant killed after the killing of 2 cops in Mandera