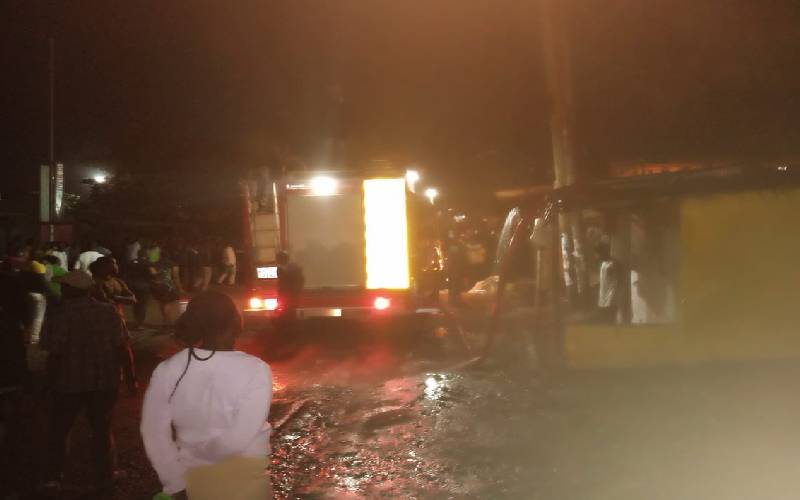 A dormitory at Jamhuri High School in Nairobi is on fire.
The one-story building dormitory that houses over 300 caught fire at around 8pm on Sunday.

Firefighters from the Nairobi County government and several other agencies are at the scene battling the raging fire.
According to witnesses, the fire has completely destroyed the building and could spread to nearby buildings.

Jamhuri High: One of the oldest schools in the city

How fight over cup left over 40 students injured

Jamhuri High: One of the oldest schools in the city
Chapa Dimba: Nairobi region finals to be held in Jamhuri High
Schools: Champs Dagoretti, Buruburu ooze class in games
How fight over cup left over 40 students injured
“The roof of the building has caved in, it is a huge fire,” said a witness.
No casualties reported yet.
Students have been evacuated to the school playground.

The cause of the fire was not immediately established.
More to follow…

Police claim disagreement over money is to blame for the chaos witnessed in Kondele as dozens of leaders struggle to keep up with countrywide tours.

With about 270 days left to rule, Uhuru's options are wearing thin

Uhuru must weigh things carefully, for he, too, wants to be in the right place when eventually power settles upon new shoulders.

Four Jamhuri high school students have been charged with assaulting their fellow students
At least ten students injured in melee between Christians and Muslims at Jamhuri Secondary School
Jamhuri high school closed indefinitely following student unrest
RIFT VALLEY
By Pkemoi Ng'enoh
AFRICA
By Brian Okoth
NATIONAL
By Jael Mboga
NATIONAL
By Mireri Junior
NYANZA
By Eric Abuga
NATIONAL
By Hudson Gumbihi
By George Njunge | 1 hour ago
By Peter Muiruri | 2 hours ago
By Nanjinia Wamuswa | 2 hours ago
By Collins Kweyu | 10 hours ago
Subscribe to our newsletter and stay updated on the latest developments and special offers!
join @standardjobs telegram channel
Pick your favourite topics below for a tailor made homepage just for you

Blinken in Kenya at the start of sub-Saharan Africa tour

The very bad evening of the PSG attack