PSG eased past Saint Etienne in a comfortable 3-1 win as Kylian Mbappe moved level with Zlatan Ibrahimovic as Paris Saint-Germain’s second all-time top goalscorer after he struck a brace on Saturday.

Mauricio Pochettino’s side suffered a 3-1 defeat to Nantes in their previous top-flight game last weekend and they looked like they might be on the end of another surprise loss when Denis Bouanga put the visitors ahead early on.

However, goals on either side of half-time from Mbappe – the second of which moved him to level with Ibrahimovic on 156 goals – and a third from Danilo Pereira sealed all three points at the Parc des Princes.

The result meant PSG – Champions to be moved 16 points clear at the Ligue 1 summit, while Saint-Etienne remained in 16th, just one point outside the relegation zone. 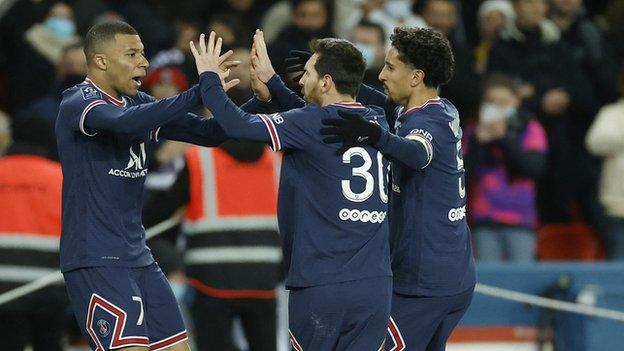 Saint-Etienne were rewarded for a bright start in the 16th minute when Bouanga picked Pereira’s pocket just outside the penalty area and superbly fired past Gianluigi Donnarumma from 15 yards.

Lionel Messi was the provider for PSG’s leveller three minutes before half-time, the Argentina international threading a wonderful pass into Mbappe, whose powerful strike from 10 yards proved too hot for Paul Bernardoni to handle.

Those two players combined to devastating effect two minutes after the restart, Messi jinking inside two players before laying the ball into the path of Mbappe, who drilled across Bernardoni to put PSG ahead.

Pereira made amends for his earlier error with PSG’s third in the 52nd minute, the Portuguese rising high at the back post to head home Mbappe’s sumptuous cross with the outside of his foot.

Neymar and Georginio Wijnaldum both struck the post late on, yet it mattered little as PSG comfortably saw proceedings out to return to winning ways with the minimum of fuss.

This comeback win means PSG have not lost any of their last 16 home games in Ligue 1, which is the best current run in the league.

The result also stretched their unbeaten run over Saint-Etienne to 26 matches, equalling the longest unbeaten streak in their history against an opponent (also 26 against Angers, which is an ongoing run since December 1976).

With the brace, Mbappe is now level with Monaco’s Wissam Ben Yedder at the top of the Ligue 1 scoring charts with 14 goals after Saturday. Barring injury, he will unquestionably move clear of Ibrahimovic in PSG’s all-time rankings, yet whether he breaks Edinson Cavani’s record of 200 goals for the club depends on whether he moves to Real Madrid at the end of the season.

Goals have been hard to come by for Messi since his move from Barcelona, but he is having no such problems creating them for his teammates. He has now recorded six assists in Ligue 1 since the turn of the year, which is more than anyone else in the top five European leagues.

Both sides will have to wait till next weekend to get into action again. PSG visit Nice next Saturday, while Saint-Etienne hosts Metz a day later.